Whose law is it anyway? A guide to Canadian criminal law

Almost everyone in Canada has dealt with criminal law at some point – a criminal penalty can include a simple fine like a parking ticket on through more serious punishment for serious crimes. Even if you’ve never committed a single infraction, criminal law is an active force in all our lives.

But where does criminal law come from, and who has the power to say what is criminal? Let’s take a quick look at the fundamental sources of criminal law in Canada, starting with the basic principles and structure of our criminal justice system.

To get to the origins of criminal law in Canada, we have to go all the way back to 1867 and the Constitution Act. This document, issued by the British Crown, determined the exclusive jurisdiction of the Parliament of Canada over the matters of criminal law – that Canada, as a new nation, was responsible for defining and punishing its own crime.

Parliament enacted the Criminal Code in 1892. It codifies criminal offenses in Canada, though much of its content was imported from Britain. The Code is not the only source of criminal law in Canada: it has been expanded on since its creation by other federal statutes like the Canada Evidence Act and the Controlled Drugs and Substances Act.

In 1982, a new Constitution Act was passed, along with the Canadian Charter of Rights and Freedoms. The Charter establishes the fundamental rights of Canadians, including the right to a trial within a reasonable delay, and to be presumed innocent until proven guilty.

All Criminal Law is Federal

But the provinces can still get you in trouble…

Ultimately, this means that all crime is federal, in the sense that the Parliament of Canada has exclusive jurisdiction over criminal law, and is the source of the Criminal Code.

But wait! The provinces also have their own powers, and can set regulations to create quasi-criminal offenses, also known as regulatory offences. The provinces also have a number of important powers associated with the administration of criminal law – they hire prosecutors, appoint provincial court judges, and are responsible for the majority of criminal law prosecutions.

The section, 92.15, of the Constitution Act specifies that provinces are in charge of “[t]he Imposition of Punishment by Fine, Penalty, or Imprisonment for enforcing any Law of the Province made in relation to any Matter coming within any of the Classes of Subjects enumerated in this Section”.

So what does that mean? It means that the provinces can create the quasi—criminal offences only in relation to the matters within their jurisdiction. One example is Ontario’s Liquor Control Act. It defines, among other things, who can sell alcohol and under what conditions, which is entirely in the province’s jurisdiction as laid out in our Constitution.

Provinces can, in turn, delegate power to municipalities to create and enforce their own bylaws. Things like pet control, parking, garbage dumping, etc. are traditionally municipal, and a different set of regulatory offenses.

…and most criminal cases are tried in provincial courts!

The provinces also participate in criminal matters by upholding the administration of justice within the province including the constitution and organization of provincial courts. The section 92.14  grants provinces jurisdiction over “[t]he Administration of Justice in the Province, including the Constitution, Maintenance, and Organization of Provincial Courts, both of Civil and of Criminal Jurisdiction, and including Procedure in Civil Matters in those Courts”.

It is! Criminal law is not for the faint-hearted. But there are basically two things to remember:

One, there are two levels of crime. Crime as defined by the Criminal Code and other statutes, like murder, assault, theft, fraud, property crimes like arson… are all federal-level crimes. Infractions of regulations, like speeding on the highway, not licensing your pet, or serving liquor without a license, are usually provincial or municipal regulatory offenses. Provinces and municipalities can have their own courts and enforcement mechanisms for these.

And second, provinces and municipalities support the federal system by helping enforce the law. That’s why the Ontario Provincial Police or the Winnipeg police force can investigate, arrest, and prosecute people for murder (a federal crime), as well as provincial and municipal infractions. All levels support the investigation and prosecution of federal crime, but only Parliament can decide what is a crime by amending the Criminal Code. 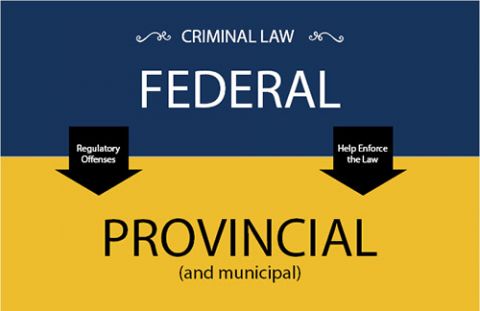