From TA’ed to TA: student moves from Certificate to law school… and back

When Lori Philpott, Law’22, began considering law school as a future, exploring the topic was as easy as choosing an elective.

“I started taking the Certificate as an elective during my undergrad in French Studies at Queen’s,” Philpott explains. “After taking Introduction to Canadian Law in 2017, I completed the Certificate in 2019 with Aboriginal Law, Corporate Law, and Intellectual Property Law.”

Now, years after that first course, she’s a law student at Queen’s Law – and enjoying her first TA job at Queen’s Law. This May, Philpott began working with students in Law 202/702, the program's Aboriginal Law course.

Ultimately, she says, the value of the Certificate wasn’t only in the information the courses contained. The content and delivery also gave her a sense of what law school would be like, and ultimately helped her understand what legal studies would be like. “Learning directly from Queen’s Law professors and students gave me a better idea of what law school would actually be like,” she explains. “Everyone speaks about how different it is to go from undergraduate classes to law school, but these courses gave me an understanding of what this transition would be like in terms of how classes are taught and what professors expect.”

The breadth of the Certificate courses also gave her a sense of the scope of issues in law – and a more thorough foundation in her legal studies. “As a law student now, I really enjoy the fact that I have some foundational knowledge in these areas that I can apply to what I am learning as a law student,” she says. “In my first-year Constitutional Law course, I felt I had a better understanding of the relations between Indigenous peoples and the Crown after taking LAW 202, Aboriginal Law. After taking Intellectual Property Law as part of the Certificate, I can identify IP issues that I see in my daily life and in the media, in a way I couldn’t before.”

Ultimately, Philpott says, the Certificate didn’t only give her an interest in law, but in Queen’s as her law school of choice. “I think that the professors and the curriculum are very representative of Queen’s Law,” she says. “The program gave me a good idea of what the classes and expectations would be like, and I enjoyed how the Certificate professors were so open to discussion both in the classroom and in office hours/over email. This helped to foster the community-feeling that Queen’s is well known for.”

“As a Queen’s alumni, I was really looking for that same kind of community aspect in my legal studies that I experienced in my undergrad at Queen’s, the Certificate program made it clear that community was valued at Queen’s Law as much as it was in my undergrad.”

With summer term nearly over Philpott shares her enthusiasm for TA’ing LAW 202. “I really enjoy seeing how my students interact with the course content, their research and the media,” she says. “When I took the Certificate courses, I found that my TAs were great mentors and had so much knowledge and experience to share. I found this type of mentorship to be invaluable and I am thrilled that I am able to provide the same experiences to the students enrolled in LAW 202.”

The Certificate was developed as an online program, but that doesn’t stop students from constantly interacting and applying their legal knowledge Philpott shares. “We recently had a negotiation activity take place over Zoom, and I loved seeing how the students were able to apply what they had learned in the course to a group negotiation activity,” she says. Philpott elaborates on the importance of such activities, “I appreciate that the Certificate courses go beyond just legal theory and concepts, and that they allow students to build practical legal skills and to apply them throughout.”

Lori will continue mentoring students in LAW 202 until the semester comes to a close in August and she embarks on her second year as a JD student at Queen’s Law. 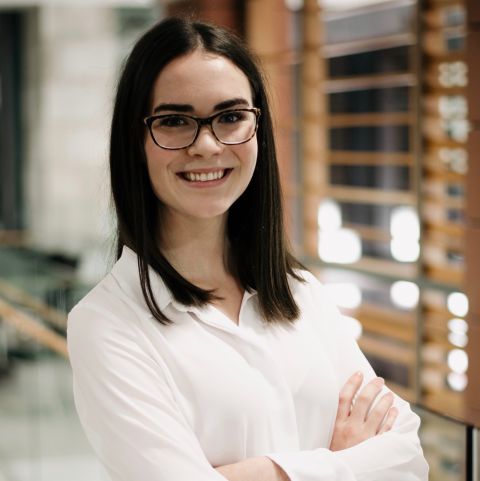