Pop quiz: is the legal system the same in all of Canada?

You may be surprised to know that Canada – unlike most nations in the world – doesn’t operate under one set of laws. There are two (actually, three) legal systems in Canada. In Quebec, by grace of the province’s history as a French colony, Civil law is the legal system. In the rest of Canada, Common law holds sway. While they have a lot in common, there are some key differences between the two:

Under common law, the law is set through precedent, a doctrine called by its Latin term, stare decisis. This means that judges are obliged to abide by earlier decisions by other judges working in the same court system as them, or by higher-level appeal courts. That means every decision made by a judge in a court becomes part of the common law, until it is appealed or overridden by a higher level court. In common law, legal research skills are paramount: finding a prior decision that supports a specific outcome is an essential skill for lawyers.
Quebec, however, operates under a civil code, itself derived from the Code Napoleon (Napoleonic Code). This means that the province operates under a fixed system of laws, and justices make decisions according to that code. Precedent can be used to help guide decisions for consistency, but precedent is not binding.

Since precedent informs, but doesn’t govern the civil law system, academics have a unique voice in Quebec law, compared to the rest of Canada: since judges have more latitude to interpret the civil code as they see fit, the opinions of scholars have more weight than in common law jurisdictions, and judges often turn to the “doctrine” of academic commentary for guidance.
In common law, academic work can be a “secondary source” to precedent, and help judges make new decisions, but does not outweigh clear precedent.

At the provincial level, juries can be a factor at any trial in the common law system. In Quebec, though, under civil law, juries are much more rare, and don’t usually come into play in private disputes.
Criminal law is not affected by the common/civil law split, as criminal law and procedure is federal, public law – the right to a jury trial in criminal matters, particularly serious ones, is governed by federal, not provincial laws.

Be sure not to confuse common law, the legal system, with common-law, the relationship status. Common-law relationships can vary in definition according to jurisdiction, but are recognized under both the civil and common law.
While we’re at it, civil law, the system of laws, is not the same as “civil law” as a term related to “public law” – in the latter case, “civil law” is a synonym for “private law,” and describes any legal relationship between a person and other people, as opposed to a person and the state itself.

Aboriginal and treaty rights are recognized as legally binding by the Canadian Constitution – Indigenous laws can be incorporated into these rights, and also form a very important part of the tapestry of Canadian law. 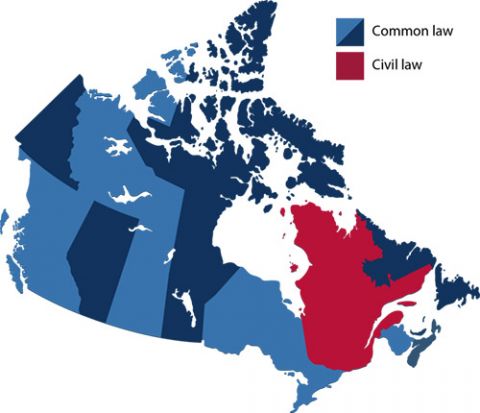