Canada has a federal system of government. What this means is that the ability to enact laws is divided among different governments. There are three main types of governments in Canada; Indigenous peoples exercising self-governance rights, the federal government and provincial governments.

The Canadian constitution explicitly sets out and distributes the powers held by the federal parliament and the provincial legislatures. Territorial governments exercise powers delegated by the federal parliament, and municipal governments exercise powers delegated by the provincial or territorial legislatures. These government’s authority to make laws is therefore either derived directly from the Constitution Act, 1867, or is delegated to it from a government that received its authority from the Constitution.

What laws can each level of government make? The subjects of the laws that a government can make are limited.

Section 91 of the Constitution sets out the subject matter of laws that the federal parliament can make.

Section 92 sets out the subject matter of laws that provincial legislatures can make.

For example, section 91 gives the federal parliament the authority to make laws regarding such matters as criminal law, unemployment insurance, trade and commerce, currency, copyrights and patents, and the census. The federal government also has some general power to enact laws that are of national importance to “peace, order and good governance” in Canada. In contrast, section 92 gives the provincial legislatures the authority to make laws regarding the establishment and management of hospitals, the administration of the courts, property and civil rights in the province, provincial lands, and generally any other all matters of a “merely local or private nature” in the province, among others.

However, in practice the law that is needed to regulate an activity often does not fall neatly into one category. Federal and provincial laws often work together. Consider, for example, the recent case of marijuana legalization.

The federal government has the jurisdiction to make criminal laws. Therefore, federal parliament that had to pass the Cannabis Act, which amends many other federal acts to make cannabis legal but sets out new laws related to the possession by and distribution to persons under 18 years of age and criminalized certain types of advertisement and sale of cannabis products, among others.

However, the provincial governments have jurisdiction over property and civil rights in the province. These powers are expansive and encompass the law not just of real and personal property, contract, and tort, but also of labour relations, workplace standards, human rights, environmental protection, insurance, the regulation of trades and professions, consumer protection, social assistance and welfare benefits, wills and estates, and zoning and land-use planning—among many other areas.  The provinces therefore have jurisdiction over how to regulate the production, distribution and retail sale of cannabis within their own province.

While all Canadians will be subject to the same criminal laws with respect to cannabis, how you purchase cannabis will likely vary widely based on the province you are in. For example, Alberta’s legislation provides that cannabis products can be purchased at privately-run retail stores and government-operated online sales, while in Ontario purchases will have to be made through government-operated storefronts and online sales. British Columbia sees a mix of both models, with sales being available at both government and privately-run storefronts and online sales.

There is more complex case law, where matters do not clearly fall within any of the enumerated subject matters allocated either to Parliament or the provinces, or where a law may touch on multiple heads of power. But this brief summary should help provide a basic understanding of the division of power in the Canadian legislative landscape. 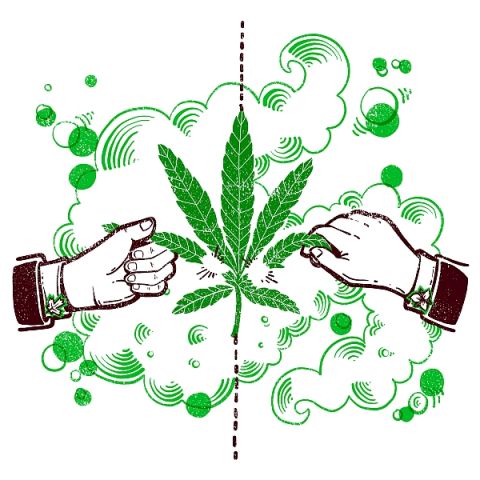